Let me move that for you…

These days, as I consider my designated intention for each morning’s yoga practice, my mind inevitably travels to those friends, family members, or acquaintances who are struggling with a challenge. Some of the first who come to mind are those experiencing physical illnesses like recurrent cancer, undiagnosed pain, systemic or autoimmune diseases, and other physical complications which, frankly, may exist completely without hope of resolution. While these are not necessarily more or less difficult to manage than other forms of dis-ease, unease, hardship or disability, the physical aspect reminds me: it is truly a privilege to be able to move our bodies in physical exercise.

I happen to hate exercise. I am lazy by nature, and it is an effort just to get myself out of bed every morning, not because of depression, despair, or any valid reason at all—other than my preference for being as languid as my black cat for as much of my life as possible. I do not appreciate my own sweat, and in fact I am tremendously distracted by it, even during yoga. A competitive bone does not exist in my body—if you want to win, I assure you, I want you to win, because clearly it must be more important to you than it is to me. You may find me walking to music almost every single day that the temperature exceeds 60 degrees, but you will never find me running (as the joke goes, if you do see me running, you’d better run too!) I have weak knees, a family history of arthritic joint replacement, giant boobs, and a surly attitude when it comes to exertion. (Eyes up here, please.) I am not a strong swimmer, I cannot shoot a basketball, and I have gone to tennis “lessons” for the past four summers without ever actually playing a match (don’t judge, it’s a social thing). Golf may be on the future agenda, but there’s a certain petite friend of mine named Vicki who hopes I borrow someone else’s driver next time I try.

Even yoga and walking were activities I embarked upon for reasons outside of the physical. Yoga was for anxiety, when I had such a feeling of generalized unease about my life and family that I developed a constant eye tic. Dr. Google advised me to avoid caffeine and try yoga or meditation, and the rest is decaffeinated rock-n-roll history. Walking is, similarly, free therapy for me: almost everything I have committed to paper (including my dad’s eulogy) has been first written in my head on a long walk, past ducks and lakes and dog-walkers, often laughing or crying behind my sunglasses as a Billy Joel song in my ear buds takes me back to high school, or the Coal Miner’s Daughter soundtrack reminds me of the family vacation in Nashville when a boy gave me a peacock feather to put in my hat at Loretta Lynn’s ranch. The fact that my body is moving, breathing, and benefiting from yoga and walking is just a lucky, unintended consequence of something I would be doing anyway.

But now, I can’t deny that both activities, and every other new experience I have had the confidence to attempt because of them (stand-up paddleboard, riding a mechanical bull) have been so strengthening and liberating that I now appreciate the fact that I am in a position to participate. I am able. My parts work.

A friend of my husband could no longer walk the golf course comfortably because of congestive heart failure. A yoga pal enduring treatment for her fifth cancer doesn’t have the luxury of trying to practice standing on her head, because she is too weak from chemotherapy to even leave the couch to vomit. A relative can’t engage in her beloved gardening successfully anymore because some core abdominal muscles were re-appropriated in a post-cancer reconstruction surgery. Amusement parks and airports are no longer places a senior citizen can easily venture across without wheels. Countless people close to me want to do more than their bodies will allow them to do, but my long, boring history with HIPAA prevents me from providing further thumbnails.

Every day that I wake up and can physically do what I desire to do, independently, I am gifted. One day, an accident may happen, or a phone call will bring a diagnosis, or a flu bug may render me too nauseated to move, and whether the roadblock is temporary or permanent, it will be unwelcome. Too many of us don’t exercise, but we should—because we can. My eyes can see where I am going, my legs hold me up, my stamina is plentiful enough…I can move my body, so I must. Whether or not I want to, I will do so for those who cannot move theirs. Exercise, like aging, is a privilege denied to many. 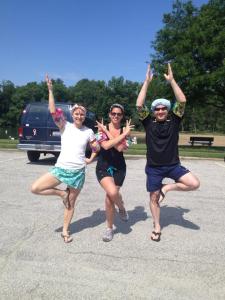 Every Body is Beautiful (Doing Yoga)

On social media recently, a big popular yoga studio in my city posted a picture of a woman in a headstand, with a caption something like, “Danielle, practicing in the sunlight wearing the new (insert big name controversial expensive-yoga-wear designer name here) scoop tank in lavender!”  Despite all of my attempts to keep any negativity at bay, I have to admit to being instantly annoyed that the woman and the sunlight and the asana all ended up being linked to an uber-expensive spandex garment. The reason for my angst wasn’t just the commercialism—who doesn’t love fashion and fun, even taking into consideration the yoga precept of non-attachment?  (Yoga is more than just poses or exercise, but that’s another story.) Instead, what bothered me about it was the exclusivity it portrayed. While I’m sure it was unintended, the post proliferated an illusion that certain people have about yoga, an illusion that it is for rich, skinny, attractive, in-shape, popular people. I myself used to hold that same mistaken idea in my head when I thought about yoga. That it was exclusive, elitist, mean-girl, cheerleader. You can’t just walk into a yoga studio!

Concurrently, the other week, NBC’s Today show coined the hashtag #LoveYourSelfie, and showed interview clips from the hosts about their own body imperfections. Hoda Kotb said, “I was heavy, and then I lost weight, but I don’t ever feel like the girl who lost weight.” I’ve been overweight as well, and I can corroborate Hoda’s sentiments—you never feel like you’re a thin girl, only the same old imperfect one who is somehow fooling everyone. It is this kind of mentality that keeps so many people away from yoga studios, when yoga is exactly what they need, for body, mind, and spirit. I want everyone to know that yoga is more than doing poses with beautiful people in a sun-filled room. You don’t have to own the gear; you don’t have to look the part; you don’t have to diet and exercise before you get there.

Because, truth be told, every body is beautiful doing yoga, wherever it is being done. I made that observation at my practice last weekend, when young and old, fat and thin, male and female showed up to practice together. Because of what had been on my mind, I looked around a little more that day than usual. That woman from the mini-van who doesn’t feel sexy in her “mom” jeans looks as graceful as Dorothy Hamill gliding along in the 1976 Olympics when she does a balancing half-moon (Arda Chandrasana). A 57-year old woman looks like a girl again, hearkening the pink ballerina twirling in a music jewelry box, during dancer pose (Natarajasana). The one who feels so soft and saddle-baggy in the hips looks perfectly put together with that famous “fearful symmetry,” the sun lighting up her passive upturned face while creating the beautiful right angles in triangle pose (Trikonasana). The sparkle of a wedding ring is magnified on chapped, wide-spread hands during a clumsy attempt at crow pose (Bakasana). Everyone can finally see the pointy front of their own hip bones in reverse plank (Purvottanasa). Teen girls look like Baby from Dirty Dancing in a simple toe stand (Padangustasana), arms overhead, calves flexed.  Husbands look vulnerable, their usual strength tested by the unusual patience required by asanas.  The scrawny and lanky eventually look like the most sinuous and stealthy python, breath and muscles churning through the planks of Surya Namaskara. A pedicure never looked better than on a foot in a d’orsay flex, leveraging Warrior III.  And hey, girl behind me? Your fresh haircut actually looks even better when your head hangs upside down in a forward fold!  In Balasana (child’s pose), every big old angry driver, every shrill-screaming mother, every bossy executive looks exactly the same as the grieving daughter or the unemployed college graduate or the triathlon trainee: humbled, buckled, almost fetal. And every single one beautiful.

Your shirt may come up in the back, and your lower back is sexy. Your sweat is a glow, not a damp stain. Your face, devoid of makeup for a change, is the translucent ruddy blush of a fresh peach. The tomboy becomes graceful, the frail attain gravitas. Skin that is stretched over muscle stretched over bones in extension becomes taut again during reaching poses. You, with the bandana around your head, you do look like a rock star. You are beside a guru with a hemp bracelet and an OM tattoo. You each look like a commercial on television, the perfect silhouette of a person who has climbed a mountain, a fierce warrior against a setting sun. You look exactly the way you dream of.  Fully you, fulfilling your potential, all in your own body.  Whether lithe, angular, Rubenesque…even the oldest and plumpest, seated peacefully, looks like serene Buddha. Every body is beautiful doing yoga.

So please, find a place to practice yoga that suits you, even if that’s at home with a video at first. You can wear an old concert t-shirt, and you can borrow a mat. But please try. You may think at your age, or your weight, or with your abilities, that the only way your kids will ever see you upside down is if they get a look at your mortgage statement. But believe me, and the friends who practice with me in a humble studio on Saturdays: one beautiful pose will lead to another, and you won’t even believe the things you can do. Yes, you!